Is unbelief a sin?

I received the following question from a friend of mine on Facebook during the course of a conversation regarding salvation and whether or not all men are given the opportunity to be saved.

If unbelief is a sin and Christ died for the sins of all then wouldn’t all be saved?

The question of unbelief being a sin is a rather common one so I decided to address it here for the benefit of all. I imagine like several of my posts, I’ll end up referencing it a lot.

Unbelief is not sin, otherwise we are faced with a dilemma of charging to one’s account something they had no control over. Rather, what is a sin is all the actions we commit that are against the law of God. I believe it is critically important to reject the premise that what we are talking about is a person’s beliefs as if the person is heading to heaven if but for one thing, their intellectual acceptance of a set of facts.

No, the real picture I believe best fits the Biblical model is one of a slave who has no hope of escaping on their own. And then someone come in, beats down all the guards, sets the prisoner free, and opens the door.

All we have to do is walk through that door and we are free. In fact we all have the potential to be free and have done nothing whatsoever to contribute positively to our being free. The only thing we can contribute to our freedom is a negative contribution in the form of rejecting it all in favor of remaining in prison.

As Ken Keathley so eloquently put it in “Whosoever Will” (HT: Wardrobe Door):

Imagine you wake up and discover that you are in an ambulance being transported to the emergency room. You clearly require serious medical help. If you do nothing, you will be delivered to the hospital. However, if for whatever reason you demand to be let out, the driver will comply. He may express his concern, warn you of the consequences, but he will abide by your wishes. You receive no credit for being taken to the hospital, you receive all the blame for getting out.

Depravity, is it total?

In a recent discussion on Facebook with a few Calvinistic brethren of mine, we ran across the topic of Total Depravity. Here is a segment of that conversation wherein I discuss the Reformed view of this doctrine’s flaws.

Jared, your view of man’s depravity seems to be rather chaotic and confused. Much like Luther and Calvin’s views on the matter were. Especially Calvin.

I remember reading in the Institutes on several occasions where Calvin would say in one chapter that Man was unwilling to submit to Christ while in the next he would go on about how man was unable to submit to Christ. Which is it? It seems fashionable in Reformed doctrine to attempt to have both. To have your epistemic cake and eat it too. However this is not merely a mystery (the favored escape hatch of Calvinists when faced with the logical and philosophical paradoxes elicited by the conclusions of their theological system). Rather, such notions of man’s inability to do good is antithetical, or logically opposed to the notion that man is unwilling to do good.

And therein may lie another difficulty for us. For the good I speak of is good meritorious unto salvation. In that respect we can certainly make a case that no man seeks after God of their own accord. However we’ve thankfully also been shown that God, through the Holy Spirit, is at work in the world drawing all men unto Christ. So in the end, the Calvinist notion of no man seeking is only half true. The rest of the truth is that man has been given all he needs in order to “seek and ye shall find”. As such I completely reject the notion that I Corinthians 2:14 is a normative prescriptive statement regarding man’s noetic capabilities such that, apart from Christ, a man is wholly ignorant of all spiritual truths.

Regarding Matthew 7:11, the focus of the passage is on the father who gives the ultimately good gift of his son. The focus is on the giver, not the gift. This ought to be pretty plain since gifts cannot, in and of themselves, be either good or bad. It is the giver and their intentions in making the gift that determine the goodness or not of the gift. I would say that I am surprised that you attempted to avoid this relatively straightforward and simple teaching of Jesus but I must admit that I have come to expect theological contortions like this when one holds to a man-made theological system first and foremost as opposed to simply taking the text at it’s plain meaning.

What is a text’s plain meaning? I would argue that it is what someone, saved or not, would understand the author to have meant.

But therein probably lies another great gulf between us for I do not think one can make the honest case (without severe epistemic ramifications) that apart from Christ dwelling within us we can not know or be certain of our knowledge regarding any truths whatsoever.

Oh, and regarding the LBC, WMC, etc. I hate to tell you but none of them are Scripture. Further I would argue that they all suffer from the same philosophical short-sightedness in that they somehow manage to miss the glaring problem with evil, sin, and suffering they create by their view of God’s sovereignty and how all things that come to pass (including sin) were somehow ordained by God. You can cling to the notion of a greater good if you wish, but I would argue that the scores of people whose faith has been wrecked and destroyed by such a heinous view of God ought to be a clear warning that such a notion is not only logically and morally untenable, but that in practice the fruit it yields is far from serene comfort.

The fact is that God is not in league with what he claims to be waging war against (name sin, death, and hell).

Does the Bible Provide an Adequate Answer to the Problem of Suffering? 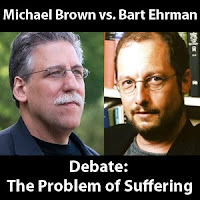 Dr. Michael Brown and Dr. Bart Ehrman debate the topic: Does the Bible Provide an Adequate Answer to the Problem of Suffering? at Ohio State University on April 15, 2010. More information about this debate can be found at the debate website.

This was a fascinating debate between, as the moderator put it, “two men who are deeply convicted in their hearts of their respective positions”.

It has often been said that of all the objections to theism in general and Christianity in particular, the question of evil is far and away the hardest one to answer. However this debate shows how Christianity not only offers an adequate answer, but also offers something that no other system, particularly atheism/agnosticism, can.

What is original sin?

When dealing with the doctrine of “original sin” it is important to understand what this doctrine does and does not mean. Simply put, it does mean that because of the sin of Adam and Eve (though, Biblically, the full weight of responsibility for this sin falls on Adam’s shoulders) sinful proclivities have entered into the hearts of men. As a popular Christian song puts it:

O to grace how great a debtor
Daily I’m constrained to be!
Let Thy goodness, like a fetter,
Bind my wandering heart to Thee.
Prone to wander, Lord, I feel it,
Prone to leave the God I love;1
Here’s my heart, O take and seal it,
Seal it for Thy courts above.

What the doctrine of original sin does not mean is that we are all borne owing the debt of sins Adam incurred. In order words,

We are not responsible for the sins of someone else.

One of my favorite verses showing how we do not pay for the sins of others, Deuteronomy 24:16:

It simply means God does not charge us a debt we did not incur which is why Jesus’s willing sacrifice on the cross is so full of grace because He freely chose (under no compulsion, though with great agony) to take on a debt He Himself did not incur.

“Original sin”, if understood in the sense that we are guilty of sin from birth logically leads to the untenable conclusion that all children go to hell (unless one holds to the unbiblical stretch known as covenantal theology) for sins they did not freely choose to commit.

Romans 3:23, which tells us that “all have sinned and fall short of the glory of God“, is not a prescriptive phrase, that we will by necessity sin, but rather a descriptive phrase about what we all freely choose to do. Given long enough, after reaching the age of accountability, we will come to know the difference between good and evil and we will freely choose to sin of our own accord.

The fact is that we are actually borne innocent and freely choose to sin thereby breaking ourselves and disqualifying ourselves from participating in a relationship with a holy God.

We need a savior, not because of a bum deal we inherited but because we knowingly bought into the lie of sin.

UPDATE: Here is an excellent article on this subject over at 4truth.net.